There are literally tons of reasons to watch Orange is the New Black, a Netflix exclusive drama featuring the daily struggles of women inside a fictional women’s prison in upstate New York.

The series starts off innocently enough, with a seemingly innocent-looking, upper-middle-class social butterfly Piper (Taylor Schilling) being arrested and sentenced to a year-and-a-half of hard prison time, due to a past drug transgression while helping then-girlfriend, Alex Vausse (Laura Prepon).

We’ll leave the rest of the main storyline to your imagination, but let us just say that Piper isn’t as innocent, or weak as she first seems, and Alex may or may not end up being the loyal ex-girlfriend we’re led to believe initially! 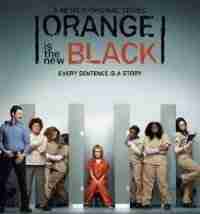 Binge watch orange is the new black on Netflix!

This ground-breaking drama is a worthwhile way for both sexes to spend several lackadaisical hours in front of the television or computer monitor.

Trust us, there’s way more to it than a prison drama, as you’d probably gather. After all, you’d just watch a real prison documentary if you wanted to see what goes on behind closed doors in a real prison, right?

#1: The main structure is a lot like ABC’s Lost: Everyone openly, or secretly loved Lost, right?

Now it might seem like a stretch comparing a prison to a tropical island in the middle of the Ocean but bear with us. Like Lost, Orange is the New Black not only features women stuck in prison, we get to see what put them there in the form of frequent, but not too frequent flashbacks. Each episode focuses on one, and occasionally multiple characters; their lives before prison, and the events that eventually led them there.

Really, one could compare the show with Fox’s hit Prison Break too, but whether you choose one show to compare OITNB with or another, the female prison drama stands very much on its own. While the overall outline has been done before, the writing’s uniquely superb! The flashbacks, combined with who the women have become since entering prison, really makes it hard not to relate with and humanise the characters.

#2: Gripping relationship issues arise and are dealt with…

Because OITNB isn’t a mainstream network show, the writing team is afforded the ability to get away from the fakery that exists on typical mainstream shows. People swear at each other when they argue, talk about rude and crude things, and there isn’t always a pleasant fairy tale resolution to the character’s relationship problems, after multi-episode arcs that can span for 20+ episodes like you’ll find on many of the big network dramas.

Orange is the New Black doesn’t pull very many punches in their prison story lines, or the character flashbacks that occur in every episode. We see how the women deal with the men, women, children, friends, and other people in their lives, without a set of PG “Network Blinders” on like with many other shows we watch. Sometimes there’s a happy, or semi-happy ending. Other times people die, hate each other afterwards, or (prepare yourself) go to prison to do a dime for themselves or someone else. Just like real life!

As a man, and even woman, you’ll learn a thing or two about female anatomy that networks like ABC, NBC, or CBS won’t allow past their writer’s tables. We’re talking here about the purely educational type of lessons, not the frequent forays into the life of a lesbian living in a female prison, which we’ll delve into a bit later on.

One such anatomy lesson comes from a real-life transgender actress, Roderick Lavern Cox, who plays Sophia. In the episode, Sophia shocks the main cast of characters, and probably over 90% of the viewers watching, when she divulges that women have an extra hole inside their vagina that allows the pee to pass through. The ensuing dialogue is hilarious, and this is just one such lesson you’ll be sitting in on when you watching Orange is the New Black.

If you’ve never watched the show, you’d still have to be living in a black hole in space somewhere not to have heard about the torrid lesbian scenes between the show’s best known female leads, sexy Piper Chapman (Taylor Schilling) and the dark and mysterious Alex Vause (Laura Prepon). Let’s just say we’re treated to an escalation of sorts in the level of gratuity between the two, from the first episode on up through the end of the most recent 3rd season!

Then there’s the daily carryings-on from gregarious Pennsatucky (Taryn Manning). This woman and her nemesis, Big Boo (Lea Delaria) the show’s other most prominent lesbian Top, are frequently found competing for the latest “fresh meat” to enter the prison, in addition to the host of other lesbian partners they maintain within the prison.

Last, there’s the tough, yet extremely sensitive and sexually reserved Poussey (Samira Wiley), who doesn’t like to cat around, but rather finds herself interested in her prison bestie, straight-laced Tasha (Danielle Brooks), who has no interest in entering into a lesbian relation.

The lesbian dynamic on the show is as much interesting as it is sexy to watch, as there’s more of a sense of purity and comfort displayed than what you’d find in a male prison show, where sexual favours are dispersed for “protection” or goods and services.

#5: Orange is the New Black ain’t no fashion lesson…

This mostly applies to men who’re tired of sitting down for a night of Sex and the City or Desperate Housewives reruns with the wife or girlfriend, only to listen endlessly to the ladies ramble about the latest Gucci or Coach handbag, or to hear Carrie rattling on about her $40,000 shoe addiction for a half hour. If you’re a tomboy-type of gal, or not at all a fashionista, this reason to watch applies to you too.

As you can guess from the title, these women wear Orange jumpsuits and prison-issue sneakers. Well, that’s not entirely true, depending on the political state of the prison, you’ll frequently be treated to a wardrobe change up, in the form of beige jumpsuits. Poussey (Samira Wiley) is also strangely allowed to get away with wearing a blue sweater over her prison garb. But basically, these women have more important things on their agendas than talking about what clothing or footwear they’ll be wearing to the mess hall, or movie room!

#6: You can trade your booze, smoking, or sugar addiction for a healthier one…

Just ask King of Queens star Patton Oswalt, who compared his dilemma of choosing between watching an entire season of the show at once – or alternating episodes between OINTB and Breaking Bad – to what a mid-70’s era heroine addict must feel like when they’re jonesing for a fix! (see his Twitter comment)

This sentiment is frequently echoed by other celebs and regular people just like you, who’re addicted to this Netflix exclusive prison drama. This and Netflix’s other hit original, House of Cards, are both hard to not get addicted to. The ~13 episode seasons just aren’t enough to curb the cravings you’ll feel after you watch OITNB for the very first time. Drinking a bottle of booze every night or hammering back an entire pie after dinner won’t seem so important anymore!

So why aren’t you watching Orange is the New Black Episodes on Netflix right now?

The ratings for this show are through the roof with an 8.5 on IMDB, 9/10 on TV.com, and an average 9/10 rating on Rotten Tomatoes, across the first two seasons of the show.

We’ve only just skimmed the surface on reasons you should sign into Netflix and watch this show right now. You’ll be hook after the first 5 minutes of the opening episode – guaranteed! Not sure who offers the best online streaming content? read our definitive guide Hulu plus vs Netflix vs Amazon instant to see who reigns supreme.

OITNB is a gritty drama, with lots of laughs, and plenty of gripping story lines, delving into different lifestyles we can all relate to suburbia, high society, urban street life, backwoods America, etc. All that with a little international intrigue mixed in for good measure.

So what are you waiting for? Go watch orange is the new black with a free Netflix trial NOW!

Check out 16 Things You Didn’t Know About OITNB

Back To Home page