Why was Eric Stoltz fired? How weird was Crispin Glover? And why did the DeLorean need to reach 88 mph? Celebrate the day to which Marty McFly and Doc Brown travel in 1989’s Back to the Future II with these facts.

1. It was almost called Spaceman From Pluto

Sid Sheinberg, the risk-averse studio executive in charge of shepherding Back to the Future into cinemas, was spooked by the dismal box-office performance of time-travel movies Somewhere in Time, Time Bandits and The Final Countdown. Fearing the same fate for Robert Zemeckis’s film, he suggested an alternative title inspired by the script’s references to Marty McFly being mistaken for an alien by the residents of Fifties Hill Valley: Spaceman From Pluto.

Producer Steven Spielberg decided to pretend he was joking, despite knowing full well that he wasn’t. “Dear Sid, Thank you for your most humorous memo,” he responded. “We got a big laugh out of it. Keep ’em coming.” The original title stayed, and today Sheinberg denies that he ever thought his mooted title was a good idea. As he tells Caseen Gaines, author of the new BTTF book We Don’t Need Roads (Plume, £11.99): “I never in a sober moment advocated Spaceman From Pluto as the title.” 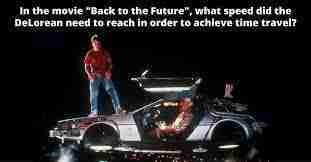 2. Doc Brown once had a chimp sidekick called Shemp

Sheinberg may have been right about this one. In their original script, Zemeckis and his co-writer Bob Gale gave mad scientist Professor (later changed to Doc) Brown a primate companion called Shemp. “Sid hated that,” Gale tells Gaines. “He told us he’d looked it up, and movies with chimps never made money.”

Gale pointed to the success of Every Which Way But Loose, in which Clint Eastwood starred with a simian called Clive. But that was an orangutan, Sheinberg replied. Big difference. Shemp subsequently became a dog named Einstein.

3. It was the first film to nuke the fridge

The movie equivalent of TV’s jumping the shark, the phrase was coined after Indiana Jones shielded himself from a nuclear bomb by hiding in a fridge, and has now become shorthand for a ridiculous, logic-defying plot device. But Back to the Future almost did it first. In an early version of the script, the time-travel device was driven towards an atomic blast while strapped to a fridge, with Marty McFly climbing inside to escape the blast. Steven Spielberg reportedly nixed this idea, worried that kids would copy Marty and become trapped inside the family refrigerator.

Michael J Fox was Zemeckis’s first choice to play Marty McFly, but Fox, then starring in the sitcom Family Ties, couldn’t make room in his TV schedule. So filming began with Eric Stoltz, and the director quickly realised he was woefully miscast. Although Stoltz had learnt to play guitar and was a pretty good skateboarder, he just couldn’t do physical comedy – the “Daffy Duck humour”, as Spielberg called it. As co-star Lea Thompson puts it in Gaines’s book: “Eric is such a different actor and he could be very difficult. It was a time when we were emerging from the Seventies. All the young actors wanted to be like De Niro and Pacino, which was good in a lot of ways.”

For Stoltz, this meant taking his rivalry with screen bully “Biff” Tannen to ridiculously Method extremes. Actor Thomas Wilson, who played Tannen, tells Gaines that Stoltz repeatedly left bruises on his collarbone after refusing to ease up during their fight scenes. To Wilson’s relief, Stoltz was eventually paid off and – after an agreement was reached with the producers of Family Ties – his scenes reshot with Fox.

But Stoltz’s performance lives on in an alternate universe imagined by the science fiction series Fringe, as seen in this shot:

When told that his co-star had been let go, the actor playing Doc Brown reportedly said: “Who’s Eric?” Stoltz had been referred to as “Marty” throughout the production, and it transpired that  Lloyd believed that was his real name.

After playing George McFly in Back to the Future, the eccentric actor carved out a niche making gruelling, semi-pornographic outsider art films, performing one-man dance shows, and touring the world with a PowerPoint presentation called Crispin Hellion Glover’s Big Slide Show. So it may surprise absolutely nobody to learn that when Lea Thompson was invited to his apartment for an evening of line-reading during filming, she found his home painted entirely black, devoid of furniture and with a stainless steel operating table in the middle of the living room. In case you’re curious, Glover currently lives alone in a 15-room mansion in Prague.

7. Tom “Biff” Wilson gets asked the same questions a lot

When accosted by fans, the actor formerly known as Biff simply hands over a 400-word typed postcard containing the answers to all the questions they’re bound to ask. As revealed by Letters of Note, the note begins as follows: “I’m Tom Wilson. I was in all three Back to the Future movies. Michael J. Fox is nice. I’m not in close contact with him. Christopher Lloyd is nice. He is a very shy man. Crispin Glover is unusual, but not as unusual as he sometimes presents himself. We got along nicely. Lea Thompson is nice. Eric Stoltz originally played Marty, but was fired due to performance issues…

“Love is more important than material possessions. I made less money than you think. I don’t talk about the movies much because I’m busy with standup comedy and music performances. Those performances aren’t near the magnitude of the movies, but I find them enjoyable and satisfying, so that’s the area of my concentration…”

The internet is full of attempts to explain the speed the Prof’s car had to hit in order to time travel (sample: “If the wormhole stability was measured as lasting only .10717 seconds then to move a car 4.216 meters long [A DeLorean] through the wormhole before it closes you would need to be moving at 39.3395 meters per second or 88 MPH”). But the truth is much simpler: the production designers thought it looked cool on the digital speedometer and would be easy for the public to remember.

Glover didn’t return for the two sequels, reportedly because he asked for too much money. Zemeckis, who had struggled with getting Glover to behave “like a human being” in the first film, seized the opportunity to replace him as George McFly with another vaguely similar actor wearing a latex mask. Glover sued the producers for using his likeness, and was awarded $1 million.

But in a 2013 interview, Glover revealed the “real” reason why he didn’t come back: he objected to the ending, which finds the McFly family rich and happy. “I said to Robert Zemeckis I thought it was not a good idea for our characters to have a monetary reward,” he said, “because it basically makes the moral of the film that money equals happiness… love should be the reward.” Zemeckis, understandably, “got really mad”.

10. And Lea Thompson did not care for Glover’s replacement

Jeffrey Weissman, the poor man under the Crispin Glover latex in Back to the Future Part II, tells Gaines that his fellow actors didn’t exactly welcome him with open arms; in fact, they barely bothered to learn his name. Thompson even took to introducing him to people as “the guy playing Crispin”.

11. Chuck Berry played hard to get

The script called for Marty McFly to pick up a guitar at the school dance and invent rock’n’roll by playing Johnny B Goode. But it was written without Berry’s permission, and the rocker kept Zemeckis and Gale waiting until the day of filming to give them the go-ahead. The $50,000 cheque they agreed to write possibly helped.

12. The Ghostbusters theme would be very different without it

A few months after Huey Lewis and the News recorded The Power of Love for the Back to the Future soundtrack, they were asked by Columbia Pictures to write the theme to Ghostbusters. Loyal to Zemeckis and Co, they declined.

13. Twenty “clock wranglers” were needed for the first scene

Back to the Future’s opening is a panning shot of Doc Brown’s workshop, showing dozens of clocks all showing the exact same time. But many of them kept stopping and messing up the shot, meaning 20 crew members had to sit off-camera setting them off with switches and pulleys the millisecond each take began.

Curated from: Back to the Future: 13 things you may not know